One of our former clients, Chris, a former guardian and data specialist, has been helping us check on the RRO statistics so far. When we first started, the Tribunal didn't upload their decisions to the HMCTS website ....after we wrote a number of times about this they eventually started uploading some. Now pretty much every decision gets uploaded there. The Upper Tribunal has a different upload site for its decisions. These are the sources for most of the data used here: 742 RRO cases at the First-tier Tribunal (FtT) & 36 at the UT since the start of the The Housing and Planning Act 2016 (HaPA) RRO scheme. Chris has set up a twitter bot (@dev_rro) to retweet new decisions from both sites. He has also downloaded all the decisions and analysed them for useful information. Flat Justice uses this information to support arguments on behalf of clients in RRO cases but it's also useful for general information on RROs which we give here.

NB: an important caveat. We estimate that up to half of RRO applications are settled before reaching the Tribunal. Given that these are likely cases that would have been successful, the success rates shown below are a significant underestimation of the real success rates

What are my chances?

For 2021 we calculate that the overall success rate for RRO applications was 84%.

For 2022, after some more restrictive Upper Tribunal and Court of Appeal decisions, so far it is 77%:

The drop is largely explained, we believe, by the Court of Appeal's reversal of the Rakusen v Jepsen decision which stopped tenants from bringing RRO applications against superior landlords: many cases that had already been submitted would have failed on that basis. The average award per Applicant also fell back to ~£4,100. Still not bad.

FAKE NEWS ALERT! One website that offers representation for RRO cases has been putting about a statistic that unrepresented or DIY applicants fail with their RRO applications 79 % of the time. We have no idea where that statistic comes from. It certainly does not match what we have found by diligent analysis of the data. The vast majority of RRO applications are by unrepresented tenants so, given the very high success rate of all RRO cass, this failure rate is impossible.

How much Rent will I Get Back?

The success rate should not be mixed up with the %-age of Rent that you can Get Back. RRO awards are very often given as a percentage of the rent claimed: reductions from the maximum allowable figure are made due to a number of factors such as tenant & landlord conduct and whether utilities were included in the rent. It also depends on the latest case law and guidance from Upper Tribunal (Lands Chamber) (UT). The graphic below shows how this has changed, mapped to the main UT decisions in 2021:

After the 2020 Vadamalayan v Stewart [2020] UKUT 0183 (Vadamalayan) decision there was a marked improvement in RRO awards. This was chipped away at by a number of decisions in 2021 particularly Williams v Parmar [2021] UKUT 244 (LC) (Williams) where UT argued that 100% awards should not be the default award.

The judgment needs detailed reading to assess the reasons for an RRO award adjustment from the maximum. Often there are multiple reasons and generally we list these separately (although they can be related) and in priority order with perceived or numerically most impactful first.  For example 'LL conduct, disrepair' means that there were 2 prime elements discernable in tribunal's discretionary element: landlord (bad) conduct & disrepair. When, on reading that judgment we have the impression LL conduct was more of a factor than disrepair we consequently list them in that order. For the above example of 'LL conduct, disrepair', please see below a screenshot of a paragraph from the related judgment:

What Are the Main Reasons for a case failing?

In the table below we summarise the reasons for cases failing to achieve an award. Normally there is 1 main reason for failure: when there are more reasons these are listed in order again of importance. Some of the most frequent reasons are highlighted: 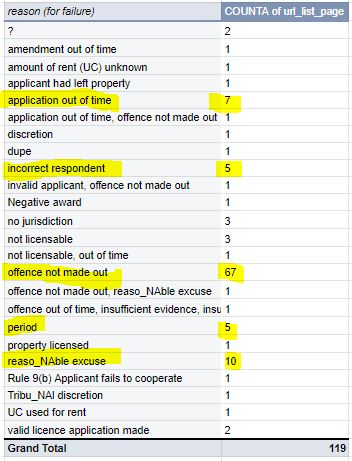 Below is a table extracted from our data showing all the failed RROs looked at with the reasons for failure along with the notes made form reading the decision:

Flat Justice is a member of  AdviceUK : a co-ordination and support network for organisations providing independent social welfare advice